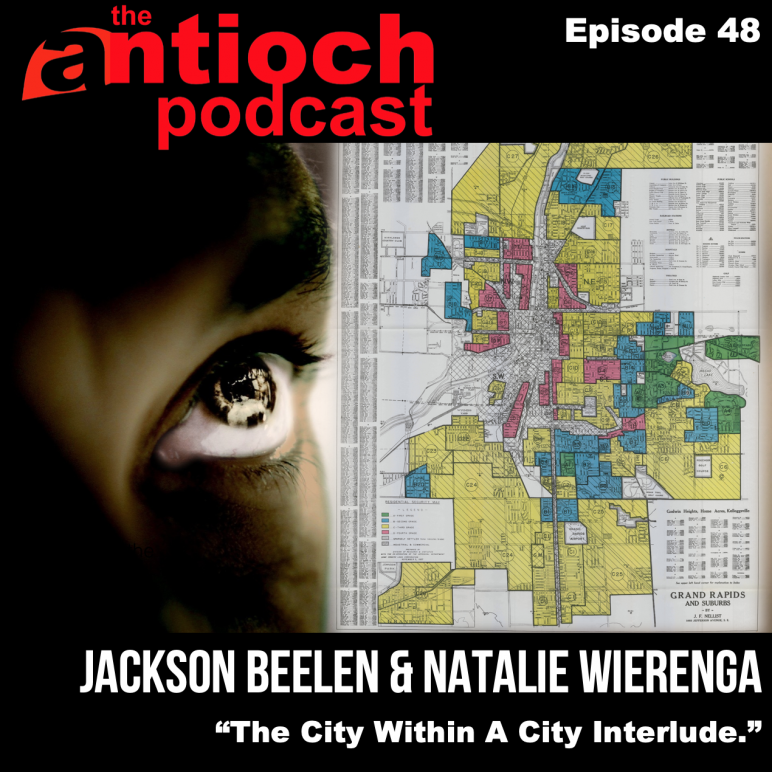 This episode is an interlude between the chapters of the City Within a City series. We will return to Chapter 3 in the next episode of the Antioch Podcast. Chapter 3 tells the story of how redlining affected people in Grand Rapids, Michigan. So before we tell this story, we will hear the stories of two people (who both happen to be good friends of mine), Jackson Beelen and Natalie Wierenga, whose lives have been notably impacted by the legacy of redlining.

Jackson Beelen is a singer-songwriter living in Grand Rapids, Michigan with his wife and their son. Jackson Beelen grew up very aware of the history of redlining in his neighborhood, as both his childhood home, as well as his present home, literally reside in the very perimeter neighborhoods where the battles over redlining were fought. Being a multi-racial person in this neighborhood meant that he grew up as a living challenge to the legacy of segregation in Grand Rapids. It also meant that he was exposed to – and incorporated – musical and ideological influences which many people would not put together. This is notably expressed in his songwriting and music.

Jackson’s lyrics bear the mark of someone who grew up in a family of pastors, artfully weaving threads of poetic theology through the strands of his everyday insights and observations. While many of his songs draw their inspiration from people around him, other songs are reflections of his inner journey. This journey has taken a number of twists and turns, as Jackson is the first to admit. He is all-too familiar with the terrain of the valley of the shadow of death, and while he is no stranger to darkness, God has insured that the darkness did not overcome him.

Natalie Wierenga is a college student studying Music and Worship at Kuyper College in Grand Rapids, Michigan with a passion for ministry in urban settings. Natalie, who is white, was raised in Rockford, Michigan, a mono-ethnic bedroom community outside of Grand Rapids. Growing up, she had few meaningful interactions with people of color. However, she both feels called to this kind of ministry, and knows that she may be underequipped for this kind of work as a white woman whose life experiences have taken place nearly exclusively in mono-ethnic suburban and rural contexts. Because this has been her experience, she has devoted herself as a college student to learning about the many ways in which her whiteness and gender have shaped her, as well as learning about the legacy of racism in the church, and in the city of Grand Rapids, where she now is studying. As part of her unlearning, she did a project at the end of her most recent semester called “Redlining Sent Me To College.” We will hear a bit about this presentation in the second-half of the podcast.