Curious about who these people you hear on the Antioch Podcast? Here is a little about each of us:

Rev. Dr. Reggie Smith, Director of the Offices of Race Relations and Social Justice for the CRCNA (Christian Reformed Church of North America).  He speaks and leads trainings nationally and internationally as part of his work for the Christian Reformed denomination.  In addition, Pastor Reggie also is a lifelong Cubs fan, which says a lot about how he developed the spiritual gifts of patience and perseverance in his life – character traits which have come in handy when working to helping congregations understand racism more deeply.  He also does a remarkable Morgan Freeman impression, if you can convince him to show you.  He identifies as African-American. 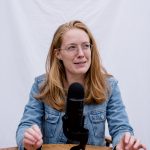 Libby Huizenga, MDiv: Public Theologian and undercover social justice warrior disguised as a mild-mannered professor and research librarian at Kuyper College. Libby had a childhood crush on Fredrick Douglass (hear the whole story in Episode 100).  As as an adult, she became passionate about anti-racism by way of becoming a vegetarian… as one does.  She is an antiracism educator with CORR (Congregations Organized for Racial Reconciliation) and is a trained RACE+FAITH facilitator.  She identifies as white woman of Dutch ancestry. 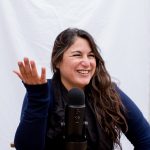 Susie Dixon, MDiv: is an adjunct seminary professor at Cornerstone Univeristy’s Professional Graduate Studies program.  She also is an antiracism educator for CORR.  Susie describes her work as “the Ministry of Love” – loving people in spite of their similarity or dissimilarity to herself.  When not at work, she would choose to live on the shore of Lake Michigan, where she spends as much of her time as possible walking the beach and talking with God.  She identifies as someone of mixed Puerto Rican and Italian heritage. 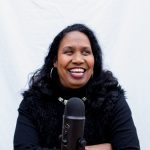 Rev. Dr. Michelle Loyd-Paige is the Executive Associate to the President for Diversity & Inclusion at Calvin University where she has worked since 1985.  She is a professor of Sociology and the founder of Preach Sista, an organization creating a supportive environment for women to discern, grow into, and celebrate their calling to ministry.  She has authored and contributed to numerous books, and enjoys vegan cooking with her husband in her free time.  To relax, Michelle likes to kick back and watch science-fiction movies from the 1950’s and 60’s – Godzilla movies being a favorite.  She identifies as African-American. 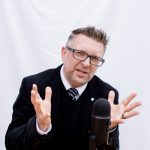 Eric Nykamp, LMSW, Producer of the Antioch Podcast.  Eric works as an individual and group therapist and antiracism educator, and has been an adjunct professor of Social Work.  Previous to this, he was a worship director at a multiethnic church. He is a trained RACE+FAITH facilitator, and CORR Understanding Racism workshop facilitator.  Eric also is an artist and musician, and loves cooking and traveling with his wife and family.  He identifies as a white man of West-Michigan Dutch immigrant ancestry.

Jane Bruin, MA is the Director of the Center for Intercultural Student Development (CISD) at Calvin University.  She is a former missionary and adjunct professor, having lived in numerous countries throughout her life.  She has a deep love for students from a vast array of backgrounds, and has a mini-fridge full of wonderful offerings to sustain students who find their way into her office who need supportive conversation – and perhaps a snack – to feel the love of God.  She identifies as a Punjabi-American woman.