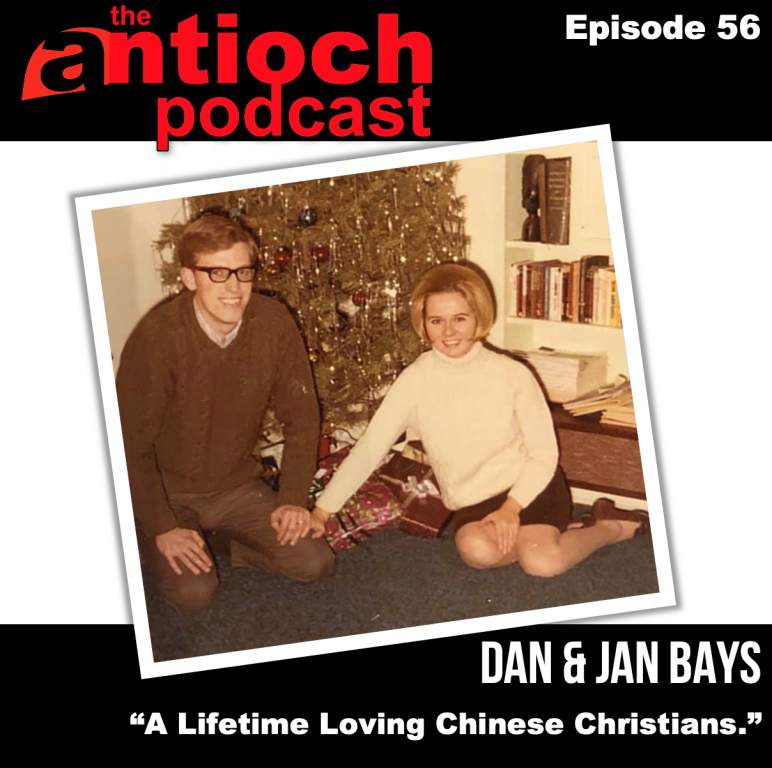 This is a long-overdue episode of the Antioch Podcast, in memory of my recently departed friend and Historian of Chinese Christianity, Daniel H. Bays, PhD.

Dan was one of the preeminent Asia scholars in the United States, specializing in the Church in China. After he earned his BA in history from Stanford, Bays would go on to earn an MA in far Eastern studies (China) and a PhD in the history of modern China from the University of Michigan. China would become an “intellectual fascination” (as Bays would say), a research focus, as well as a place to explore the intersection of faith and culture.

Bays, a voracious learner, dedicated scholar, and professor emeritus of history at Calvin College in Grand Rapids, Michigan, passed away Thursday, May 9, at age 77, following his battle with Parkinson’s disease.

This was the side of Professor Bays that many in the academic world knew: Daniel H. Bays, author and editor of six books on the history of Chinese Christianity, including his seminal work, published in 2012 – the climax of a life of learning about the Chinese church titled – A New History of Christianity in China, one of the Blackwell Guides to Global Christianity.

Revered in the United States and in Asia as one of only a handful of top scholars in his field, Dan was nonetheless a humble and unassuming man. He and his wife met my wife and I in 1999, shortly after we were married. Having just relocated to teach History at Calvin College, Dan and his wife Jan “adopted” my wife and I as their Grand Rapids family. We spent the next decade meeting multiple times every week as part of a church small group, and gathering around their dining-room table for weeknight dinners with our small children. My wife, being from Hong Kong, affectionately felt like their “Chinese Daughter.” The Bays, thoroughly familiar with Chinese culture, because like a third set of parents to us, and we spent many, many evenings together.

Dan had Parkinson’s Disease, which he continued to fight as they moved to be with their children in Missouri and Kansas after Dan retired from teaching at Calvin College. Our families stayed in touch, and as Dan’s heath continued to decline, we would make trips to St. Louis where they lived to visit often. On one of those trips, I was preparing to launch what was to become the Antioch Podcast, and had taken along some recording equipment. I asked Dan and Jan if I could practice doing an interview with them, as I had never interviewed anyone in a formal capacity before. They graciously obliged, and so one August afternoon in 2016, we sat down together in their apartment at a senior living facility where they lived, and we recorded this first interview.

This was the first time I heard my own voice on recording, and I was convinced that I was not a good interviewer. Truly, there is a lot to be desired with the sound quality and balance of the audio. I saved the recording, but did not want to listen to it again, because all I heard were the errors and imperfections.

But today I dug out this interview from my old MacBook, wanting to hear Dan’s voice again … and in retrospect I felt the interview was moving and I wanted to share it all with you.

A couple things to note. This recording was made in 2016. Dan was struggling with Parkinson’s, and it was difficult for him to sit upright and project his voice. I notice now that he was getting tired doing the interview, which I think he did because he loved me and was being kind in letting me practice interviewing with him. But as the interview wears on, it becomes more and more difficult to hear what Dan is saying. Because of this, I boosted the volume of some parts of the dialogue. You may notice a change in the volume of the background noise and recording hiss because of this.

There are also a couple of times during the interview when Dan or Jan refer to “Madison”. Madison Church is the church who sponsors this podcast, and is the church where we all met in 1999 and worshiped together for 17 years. At the time of this recording, it was two years after Michael Brown was shot in Furgeson, Missouri, a suburb near the part of St. Louis where we were recording. Like many cities, but particularly true in St. Louis, there are not many multiethnic churches for Christians to attend. Jan bemoans this fact in the interview, as she and Dan needed to attend the church service in the care facility where they were living because of Dan’s restricted mobility issues due to the symptoms of his Parkinson’s Disease.

I hope you enjoy this tribute to Dan and Jan Bays.